Modern, colorful version of the “Cleopatra” design by Pantelis Melissinos

The original modern-day Gladiator Sandals have nothing to do with the notorious gladiators of Ancient Rome. Those tough guys wore the Caliga – a Roman version of the military boot.

Today’s  Gladiator Sandals were modeled after the elaborate footwear, worn by kings and queens. The infamously charming Queen Cleopatra of Egypt wore a pair.

Cleopatra’s official style was Queen Cleopatra Philopator of Egypt (or something like that).

And in fact, she was not even Egyptian. At least not a pharaonic Egyptian. She was a Macedonian Greek. According to some accounts she was a stubborn, charismatic, sexy but conniving red head. She knew how to have her way with powerful men, despite her slightly big nose. Yes, Cleopatra had a slightly big nose. If you don’t believe just check her marble busts. In fact if her nose was a bit bigger -some ancient sources say- history would have followed a different course. Neither the influential Mark Anthony, nor the megalomaniac Julius Caesar would have fallen in love with her (big nose).

Cleopatra was a descendant of king Ptolemy the 1st, AKA Soter, a crony of Alexander the Great. That Ptolemy guy claimed descent from the mythical super-hero, Hercules. You know, that guy that has starred in various ancient Greek legends, stage plays and Hollywood movies. Hercules wore a pair of those early Gladiator Sandals. Maybe that’s why Cleopatra wouldn’t take “No” for an answer, Hercules was in her DNA. Anyway, Cleopatra was the actual inspiration for our modern-day Gladiator Sandals.

Portrait of Cleopatra by Pantelis Melissinos, based on an ancient bust of her.

In the mid 50’s, Stavros Melissinos designed his first ancient Greek sandal model (which he named “The Spartan”) for an English lady choreographer. But he didn’t stop there.  Stavros  continued visiting the Archaeological Museum of Athens and the old Acropolis Museum for further inspiration. He drew his ideas directly from the Ancient Greek Sandal designs.

The modern model “Cleopatra” or “Gladiator” as manufactured by Pantelis Melissinos.

Stavros realized the potential of this Ancient Greek Sandal idea. He made some extra pairs that were sold right away to some young American ladies. Then, the orders started pouring in. At the same time, Aristotle Onassis and his entourage of celebrities and divas started sailing to Mykonos. Many of them would buy Stavros’ Ancient Greek Sandals. This way they felt more at home, on that poor Greek fisherman’s island. Yes, Mykonos was just a poor island back then. Stavros Melissinos became famous for his sandals and poetry that came with them. See, he wrote poetry, which he handed out to his customers. The Beatles and Jackie Kennedy–Onassis also bought his sandals and became sort of regulars. Stavros turned into a cult figure of the hippy generation.

One of his early sandal models was a strappy one, which he called “The Cleopatra”. Cleopatra wore something similar but not quite the same; hers were extremely elaborate and not marketable, because they cost a bundle. So, the new model -that was named after her- was modified and was much simpler -without jewels and elaborate straps;

In the early 60s “The Cleopatra” became popular with men too and Stavros Melissinos had to rename it; he called it “The Gladiator Sandal” because it looked like those aforesaid Caligae Sandals of the ancient Roman soldiers and the notorious Roman Gladiators.

The Gladiator Sandals after their initial success with the younger crowd, fell into disfavor. In the 80s and early 90s, the “Gladiators” became the preferred style of lady librarians or Christian pilgrims. Pilgrims who made a stop in Athens before heading off to the “Holly Land”. 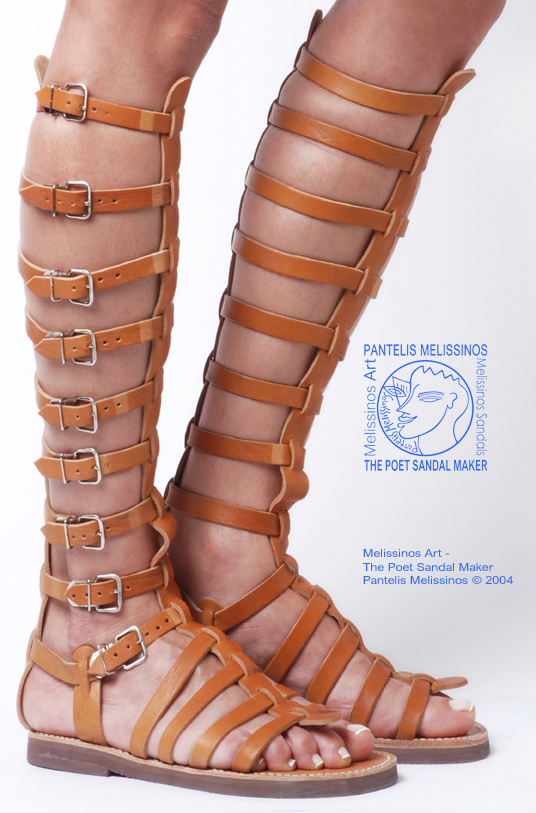 In recent years the Gladiator Sandals have made a strong comeback. Especially after they were worn by Cate Moss in the mid-00s. Women now see them as extremely sexy and stylish.  They are also very sturdy.  The “Gladiators” are perfect for casual city walks as well as countryside excursions.

Pantelis Melissinos took over from his father Stavros and made a longer version of the Gladiator Sandal. That was in the early -00s. It went all the way up to the knee and Pantelis called it “The Amazon”. That version of the Gladiator Sandal contributed a lot to this model’s popularity. The longer version with its shiny buckles and beautiful natural Greek leather is really has impressive.