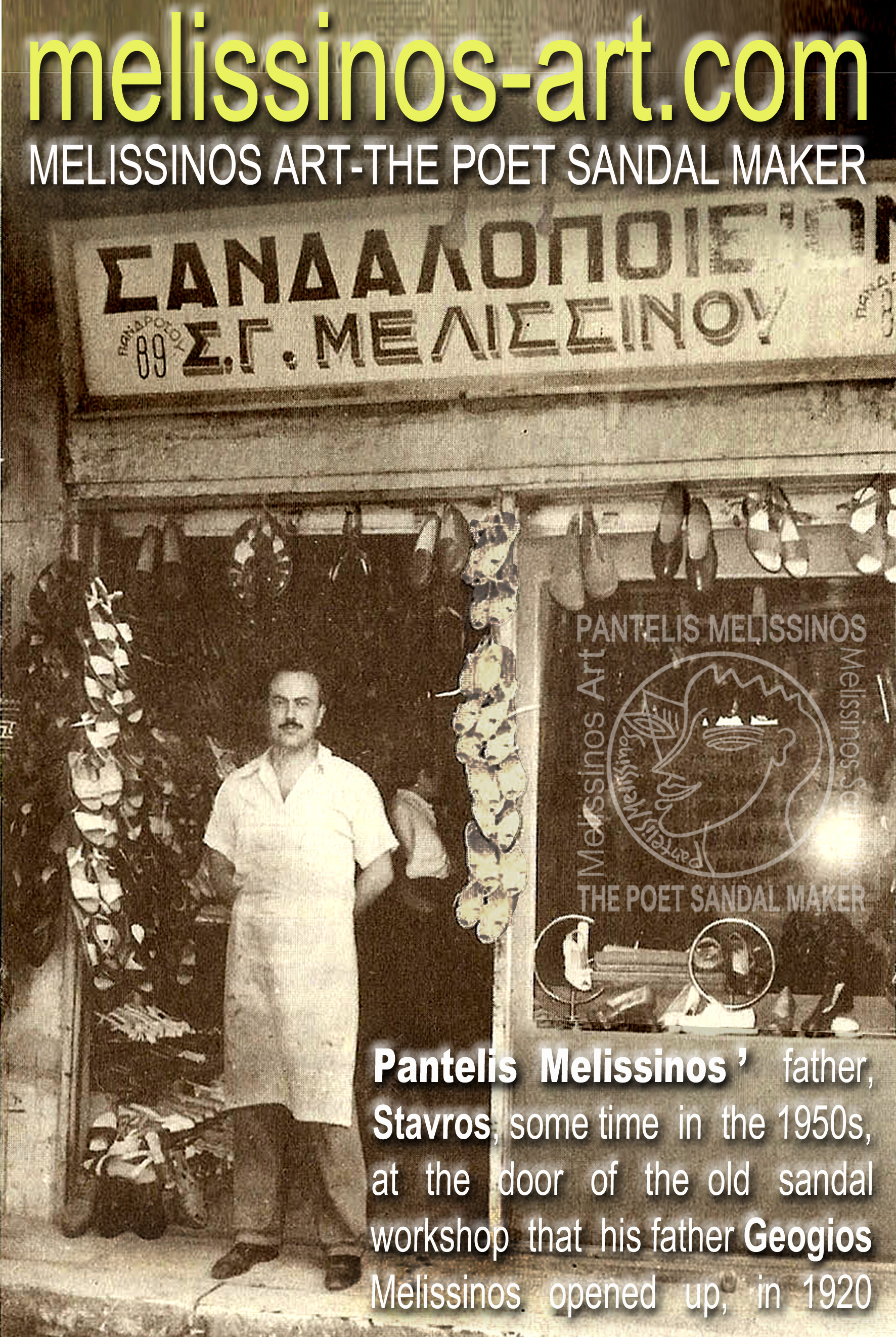 Stavros Melissinos at the door of his father’s sandal workshop, after taking over the business,  following the latter’s death, in 1955.

THE NAME OF THE WORKSHOP

The workshop, where “The Melissinos Sandals” aka “The Poet’s Sandals” are made, used to be called  “GEORGIOS MELISSINOS SANDAL WORKSHOP” and was established, in 1920, by  Georgios Melissinos, an outstanding and much loved Athenian businessman. He was succeeded, in 1955, by his son, Stavros (The Poet).

Since 1920, “The Melissinos” or “Poet’s Sandals” (as they are also known, today) have been loved by thousands and have been featured in countless magazines, newspapers and TV networks, the world over, and now on the internet as well.  The famous sandal workshop has always been visited by Greeks, who want to keep their old values and cultural identity alive, along with European Royalty and international celebrities like: Sophia Loren, Jackie Onassis, Rudolf Nureyev, The Beatles, Melina Mercouri, Maria Callas, Barbra Streisand, Jeremy Irons,  Kate Moss, Leonard Cohen, Queen Sophia of Spain and countless others, who seek something unique and not mass produced.

When, the now renowned poet, Stavros Melissinos made his first hand made sandals that were inspired by their Ancient Greek counterparts, he was laughed at by some of the Monastiraki District wise guys and shop owners, till Sophia Loren walked into his store, sometime in the early 50s. Then (and overnight)  every  hardware dealer, rug seller, or secondhand-items merchant followed suit and started selling (to gullible tourists or Greeks) mass production  imitations of the original sandals, designed by Melissinos -pretty much like they do today.

The handmade Ancient Greek Sandals that Stavros Melissinos created, in the 50s, dominate the international fashion scene until now. The “Melissinos Art -The Poet Sandal Maker” establishment has been featured or described by journalists, writers and foreign visitors as a Historic Athenian landmark.

TODAY’S “MELISSINOS” or “THE POET’S SANDALS”

Today, people -from around the world- visit 3rd generation, Pantelis Melissinos, aka “THE POET SANDAL MAKER TO THE STARS” for his celebrated and elegant sandals.

In his iconic Athenian workshop, a stone’s throw from the Acropolis Museum, they get measured & fitted and leave with pairs of bespoke Sandals made by Pantelis Melissinos “The Poet Sandal Maker to the Stars”. Sandals that last for years are a great memento from Athens-Greece.

Pantelis is also an alumnus of  the prestigious Parsons School of Design (BFA /Illustration –MFA /Painting) and has a great experience as a painter, writer, poet, set & costume designer. He has also served as Artistic Director of The Greek Cultural Center of New York. So, his sandals don’t fall short of being real works of art.